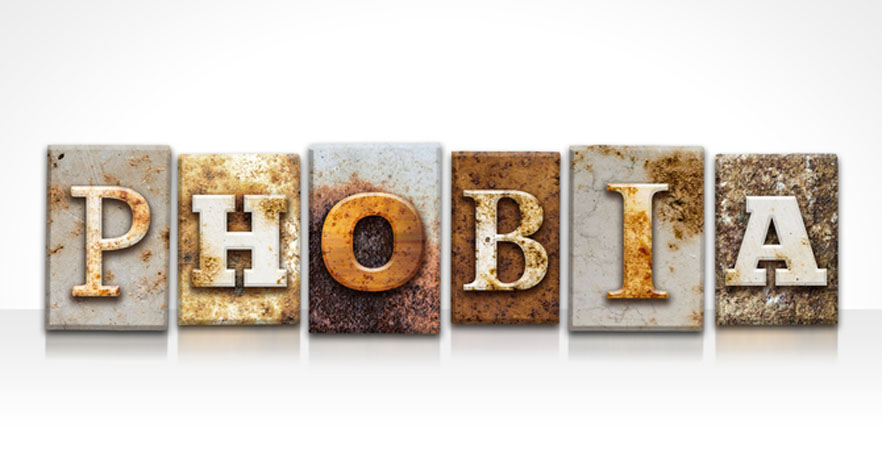 An estimated 15 to 20 percent of people will experience symptoms of a specific phobia over the course of their lifetime, and celebrities are not immune. Following is a list of phobias experienced by ten of music, movies and TV’s hottest stars.

Celebrity phobia #1: Johnny Depp and fear of clowns – Coulrophobia, the fear of clowns, stems from the ancient Greek work “coulro,” meaning “one who goes on stilts.” This phobia often develops in childhood and experts conjecture that it may originate from the disguise being worn by clowns, making it impossible for kids to gauge their real feelings. This seems to be the case with Depp who has admitted of his clown phobia, “Something about the painted face, the fake smile. There always seemed to be a darkness lurking just under the surface, a potential for real evil.”

Celebrity phobia #2: Pamela Anderson and fear of mirrors – Hard to believe, perhaps, but the Baywatch babe reportedly suffers from eisoptrophobia, or the fear of seeing oneself in the mirror.

Celebrity phobia #3: Jennifer Aniston and fear of flying – Going by the clinical names of Aviophobia, Aviatophobia, or Pteromerhanophobia, the fear of flying is actually one of the more common phobias admitted to by the stars. Aretha Franklin is another sufferer. In Aniston’s case, the fear developed after a bad flying experience. However, 6.5% of the general population is afflicted by this fear.

Celebrity phobia #4: Jennifer Love Hewitt and fear of elevators – This fear has no official phobia name, yet it is fairly common in the general population in varying degrees. Its lack of designation probably stems from the fact that it represents a combination of fears like fear of closed-in spaces, fear of heights, and fear of being in difficult-to-escape situations.

Celebrity phobia #5: Madonna and fear of thunderstorms – This fear goes by a variety of official names, including Astraphobia or Astrapophobia, Brontophobia, Ceraunophobia or Keraunophobia, and Tonitrophobia. The latter is an auditory fear of thunder only while the others are fears of both the thunder and lightning associated with storms.

Celebrity phobia #6: Uma Thurman and fear of closed-in or small spaces – Claustrophobia such as Thurman suffers from is one of the most common fears. It strikes anywhere from 5% to 7% of general population. It can be associated with specific situations, like Hewitt’s elevators or MRI machines, or it can apply to any location in which the sufferer feels as though the walls are closing in on him or her.

Celebrity phobia #7: Justin Timberlake and fear of snakes – Yep, the heartthrob singer/actor is afflicted with a decidedly unmanly fear. Ophidiophobia, or more simply snakeaphobia, is more common in women than men. The fear of snakes, contrary to popular belief, is not typically one that people are born with. However, a study conducted by the journal Biological Psychology found that “The human brain is wired to react fearfully to snakes, including in people without a conscious fear of snakes.”

Celebrity phobia #8: Kim Basinger and fear of wide, open spaces – The opposite of claustrophobia, agoraphobia has more to do with leaving a safe space than being in a wide, open space. Often it is triggered by crowded, public places like open markets. Daryl Hannah is a fellow sufferer.

Celebrity phobia #9: Carmen Electra and fear of water – Another Baywatch babe has an ironic fear. Electra’s hydrophobia stems from her inability to swim. Looks like she only played a lifeguard on TV.

Celebrity phobia #10: Howie Mandel and fear of germs – Anyone who has ever seen the comic celebrity fist pump instead of shaking hands has seen his mysophobia in action. This season of America’s Got Talent, however, had Mandel momentarily overcoming his phobia thanks to contestant Chris Jones hypnotizing him to shake hands with his fellow judging panel consisting of Howard Stern, Heidi Klum, and Mel B. You can see the astounding results of this hypnosis in action here: https://www.youtube.com/watch?v=f9dFLXV9hs0.

Hypnotism just happens to be an effective treatment for all types of phobia.